The Market for Heating Oil — Past, Present and Future

Heating oil — also known as No. 2 heating oil — is a cost-effective, efficient, clean and versatile fuel that has been used for years to heat homes. The invention of the forced air furnace in 1935 made heating oil commonplace. As a more efficient fuel for generating heat, it replaced wood. Heating oil remains popular — out of the 10 million oil-heated homes in the U.S., 350 thousand were built in the last ten years.

Like diesel fuel, heating oil contains a low-viscosity mixture of petroleum-derived hydrocarbons. It’s created through a distillation process that separates crude oil into its various components. Heating oil accounts for 25% of a barrel of crude, the second largest cut after gasoline.

Red dyes are added, giving it the name “red diesel” in nations like the United Kingdom. The U.S. relies on this red dye to distinguish heating oil from vehicle oil, which ensures it isn’t taxed for highway use. Heating oil must also conform to ASTM standard D396 to make sure it consists of homogeneous hydrocarbon oils, free from inorganic acid.

Heating oil burns cleaner than other oils, with less negative impact on the environment. The combustion process can produce near zero levels of particulate matter. By generating 138 thousand Btus of heating energy for every gallon burned, homeowners also enjoy cost-effective and efficient levels of heat production.

The Pricing History of Heating Oil

Heating oil is commodity traded in one-thousand-barrel units on commodities markets like NYMEX and the Intercontinental Exchange (ICE). The slightest change in market conditions around the world can prompt buying and selling, which in turn causes prices to fluctuate. If the market price of crude oil goes up, so does the cost of heating oil, since heating oil is derived from crude oil. This happened in 2008 when the price of crude soared. Compared to other goods and services in the market, heating oil hasn’t significantly increased in price, even dropping 23% in price in the 1980s and 1990s when adjusted for inflation.

The U.S. Energy Information Administration (EIA) collects statistics on oil prices, providing historical pricing data as well as forecasts. According to the EIA, wholesale hearing oil decreased to $1.51 per gallon by September 23, 2015.

Between 2010 and 2015, the price averaged around $2.40 per gallon, reaching a high of $3.32 in April 2011 and a low of $1.38 in August 2015. Wholesale prices fell in 2014 due to increased oil production in non-OPEC countries, and because of innovative exploitation of previously inaccessible oil reserves in places like the Bakken Oil fields in South Dakota. The Brent Crude Oil Price went from $115 a barrel in June of 2014 to $95 a barrel in October of that year. 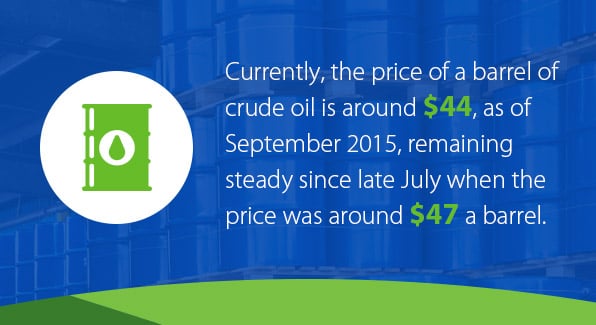 A dramatic disruption in oil production could see prices rise again. Fortunately, it’s been over 30 years since there was a significant problem with the energy supply, so prices should remain steady for the foreseeable future. There are more also reserves around the world: The United States alone has emergency reserves consisting of 700 million barrels of petroleum and 2 million barrels of heating oil.

According to the EIA, residential prices from the heating season of 2013-2014 break down by state as follows:

Current Usage and Trends by State

Most homes that use heating oil are located in the Northeast, over 8.5 million homes in fact. In New Hampshire, 47% of homes use heated oil. Massachusetts, Vermont and Maine also use more heating oil than other fuels for home heating purposes. These are anomalies in a national market that generally favors natural gas over oil — 58% of U.S. households use natural gas for space heating.

The EIA compiles the Residential Energy Consumption Survey (RECS) every four years. The RECS 2009 survey provides extensive information about household energy use, broken down by region and by state, and conveyed in the form of British Thermal Units (Btu).

With such high usage in the Northeast, it’s no wonder the cost of heating oil can be expensive. This makes it all the more important to purchase oil in the summer months when prices are lower due to a lower demand. This is when wholesale gas and electricity suppliers buy oil, in order to keep costs down. Plan ahead and don’t wait for freezing temperatures to set in before examining prices.

The Department of Energy also monitors the prices homeowners pay for heating oil. This allows consumers to compare price per gallon with what others are paying in their geographic area. The Office of Energy Efficiency & Renewable Energy (OEE) also provides detailed information about energy use, with statistics for each state.

As we experience some of the hottest temperatures on record this summer 2015, the upcoming winter season could be just as surprising. Firsthand Weather doesn’t release a final winter forecast until November, and current forecasts are unpredictable. The impact of El Niño could create warmer conditions in the north, as well as less snow and rainfall. However, warmer weather in the Pacific over the last two winters resulted in record cold and ice in the eastern half of the United States.

Price predictions are easier to make, although unexpected conditions can undermine any forecast model. The growth of domestic production, along with the 2014 drop in crude oil prices, has already altered the customary economics of the market. Current trends will likely continue.

Although Brent crude oil prices averaged $47 a barrel in August 2015, prices have shown some volatility heading into September, with changes of more than 5%. The EIA forecasts that crude oil prices will average $54 a barrel later in 2015 and $59 a barrel heading into 2016. Since July 2015, crude oil production declined in the United States and domestic production is estimated to continue decreasing through mid-2016 before resuming in late 2016. 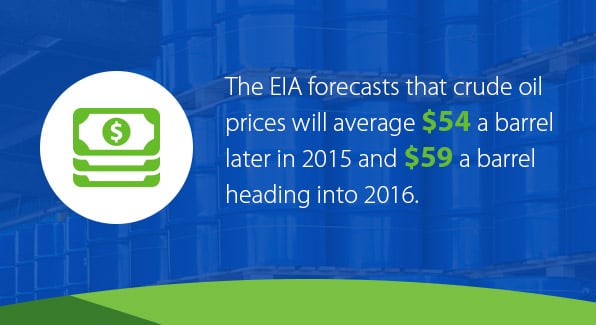 The EIA anticipates that Brent crude oil prices will continue increasing to $76 dollars a barrel in 2018. Increased demand from countries outside the Organization for Economic Cooperation and Development (OECD) could elevate the Brent price to $141 per gallon in 2040, according to 2013 dollars. This anticipated increase in oil price should support domestic oil production. A much higher demand for petroleum products around the world could contribute to an increase up to $252 a barrel in 2040. Lower demand and lower costs could mean a steady increase to around $76 a gallon in 2040.

The price of petroleum products like heating oil reflect prices refiners pay for crude oil input as well as any refining costs. Despite reduced costs over the past year, distillate fuel demand will likely increase in the long-term, causing prices to rise by 23% by 2040. Anticipation of higher demand could mean an increase to %5.81 by 2040, although a decline could mean a drop of 25% to a price of $2.32 per gallon in 2040.

Forecasts acknowledge a variety of possibilities, making it difficult to know when prices will increase and by how much. Wholesale and residential prices will likely go up by the time the 2015-2016 heating season begins in October and November. Prices may continue to increase as the season progresses, especially in the event of extreme cold. The sooner you lock in heating oil prices, the more you’re likely to save if the weather takes an unexpected turn.

Typically, the best time to purchase oil is in the summer, when usage is low. Companies drop prices by May, but by September and October, prices begin to go up again. The summer is not only an ideal time to purchase heating oil to fill your tank, it’s also the best time to schedule a heating tank system checkup to ensure the tank works properly and isn’t leaking. You may want to schedule a tank cleaning, too — in the winter months, the task might take weeks to schedule.

Keep in mind that 30% of heat is lost through improperly sealed doors and windows. Make sure to add insulation to attics and seal homes against leaks.

You might also consider upgrading an old system that generates higher fuel bills. While tanks can last for decades, oil heating systems over 30 years old might not offer the benefits of more recent clean burning systems. The latest clean-burning technologically-advanced systems even have efficiency ratings exceeding 90%.

Smart Touch Energy also makes it easy to order heating oil online: Our interactive website is available 24 hours a day and seven days a week. Not only do we offer competitive prices and a simple online ordering process, we offer the largest heating oil delivery network in the nation, providing high quality oil at low prices. Our many dealers and service providers also provide quick turnaround when it’s time to service and clean your heating equipment.

For a free oil price quote, and to see how Smart Touch Energy can save you money, click on the price tool above and enter your zip code.